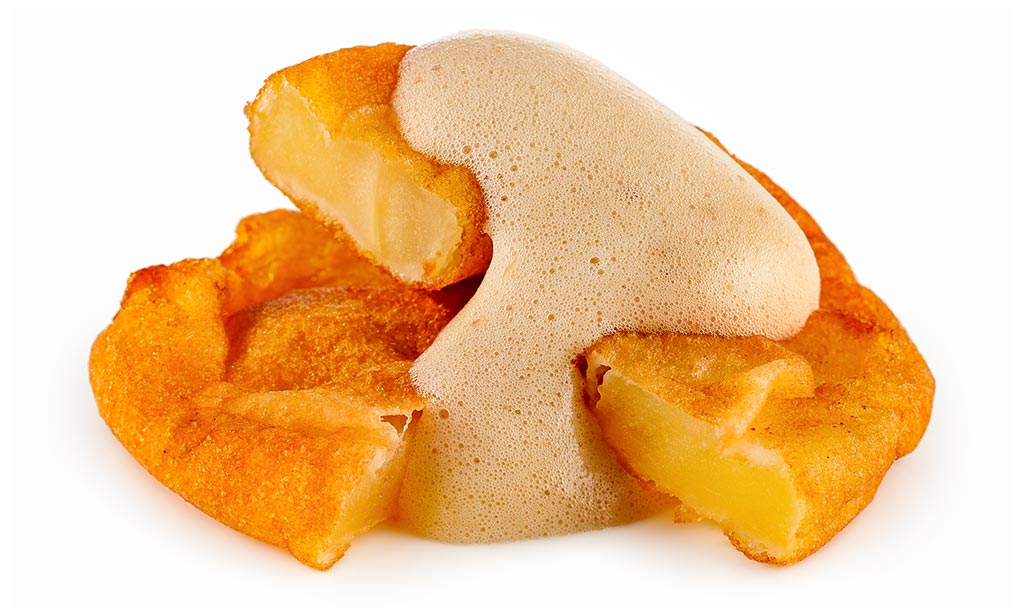 For Apfel Küchle with Zabaione first peel apples, cut into slices and cut out the core. Sprinkle lemon juice over the apple slices. Boil the apple juice with 40 g sugar in a larger pot, add the apple slices and simmer at medium temperature for about 2 minutes. Drain apple slices on kitchen paper and let the apple broth cool down. For the baking dough of the Apfel Küchle with Zabaione, whip 1 egg into a mixing bowl and stir until creamy. Separate the second egg and beat the egg whites until stiff. Save the egg yolk for the zabaglione. Stir 25 g flour and 2 tablespoons of apple broth into the egg and fold in the beaten egg white. Heat the deep fryer to 180°. Turn the apple slices in the remaining flour, pull through the baking dough and fry in portions for approx. 3-4 minutes. Drain apple kitchen on kitchen paper. For the zabaglione, boil some water in a saucepan. Set the temperature to medium. Mix 3 egg yolks, 40 g sugar and Marsala wine in a large metal bowl, place on the edge of the pot and beat the zabaglione vigorously by hand with a whisk until it becomes frothy and thick. Do not boil the water so that the egg yolk does not curdle. Arrange the apple cake with the zabaglione.